HOW PROGRAMMABLE ARE AMERICANS?

We hear about the "racist" TEA Party and many people talk like they believe it.  The people in the following picture show what is real. 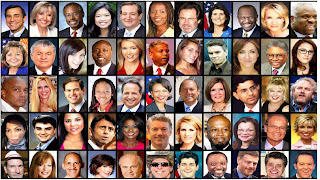 The AWFUL (*1) Administration counted on its supporters being big enough IDIOTs (*2) that they would look at the Americans in the TEA Party and be so blinded by their programming that they believed the TEA Party to be racist.  Pathetic, but true.

Like KGB defector, Yuri Bezmenov said in his 1985 interview,  you will be able to show the programmed Americans that white is white and black is black and they will not believe you.  It came true.  http://www.youtube.com/watch?v=A-ZQbJHagx4&feature=related

George Orwell, in 1948, wrote 1984 and talked about Double Speak.  We are experiencing a major redefinition of the words in our language which seems to be for an obvious purpose.  Communications depends upon precise definitions of the word which we use.  A doctor calling for a scalpel does not anticipate being handed a hammer and this is true throughout many disciplines.

“How strangely will the Tools of a Tyrant pervert the plain Meaning of Words!”  --  Samuel Adams

Michael Ramirez, the IBD cartoonist, shows an obvious example of one of the redefinitions - 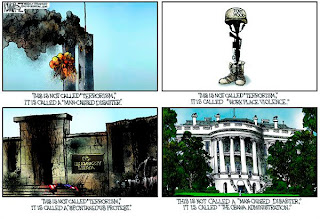 The current focus on immigration diverting attention from the reality that we do have a legal, in need of major revision, immigration program.  It is being packaged in an emotional rather than logical promotion.  A sovereign nation has the ability to control people coming across its borders and if it is so desirable a destination, preserving what makes it that appealing is not something which should be ignored.  Renaming illegal aliens which is a concise description pointing out our need to address the issues rather than actually dealing with the issues avoids the problem.  Renaming illegal aliens to obscure what is real and existent, arguably to the detriment of America in maintaining a way for criminals or terrorists to enter, creates a danger to our country.

Why would CAP push so hard for the obfuscation?  Possibly because a major funding source commented, “It is easy to destroy a country’s currency. It is very difficult to detroy their sovereignty.”  --  George Soros  Don't we, as Americans, have an obligation to preserve the America worth people leaving all that they have in other countries because it is better in America rather than not maintain the value of America?

FreedomWorks is a group that is doing something about America's path today at http://www.freedomworks.org/

“On every question of construction, [let us] carry ourselves back to the time when the Constitution was adopted, recollect the spirit manifested in the debates, and instead of trying what meaning may be squeezed out of the text, or invented against it, conform to the probable one in which it was passed.”  -   The Writings of Thomas Jefferson, Edited by Albert Ellery Bergh