WHAT WILL THE DEMOCRAT HEALTHCARE REFORM ACCOMPLISH? 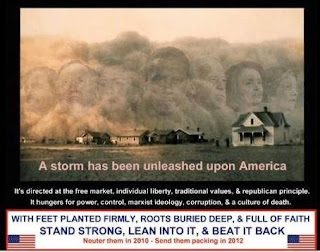 I have included a link to write your representative and automatically copy 58 Blue Dogs plus my letter to my Representative, Dana Rohrabacher, later in this post. I cannot understand how the legislators can so obviously connive to pass something which the majority of Americans do not want. It seems to me that the awareness and networking of the awakened, previously tolerant and apathetic conservative leaning majority have given notice that if the Progressives do not succeed this time it will not happen for a long time to come. We are reaping the benefit of living the good life and ignoring our responsiblity to hold our government accountable. We are now awake and fighting to preserve the America which we inherited and which the government is trying to delete from the education of the indoctrinee school children. Showing An Inconvenient Truth as if it were gosipel and not showing opposing information and having debates creates lemmings waiting to be served their thoughts at the KoolAide Stand of the Left.

I believe that the supporters of the Progressive movement would rather feel good than be solvent as we go over the financial cliff into an economic abyss. The value of their ideas is measured by the quantity of input and not by the results = intentions not what happens. This is LaLaLand wishful thinking not planning and working hard to do something and it is not a sustainable way to run a country.
I believe that the Cap-and-Trade based on fraudulent data and the Health Care Reform are ways to justify hiring a lot of government employees to deceive the non-thinkers and create the illusion that we are experiencing an economic recovery as well as to gain power over America. It will buy votes by those who get employed after being held under water financially by this conniving administration and the Willfully Ignorant who support it. A certain amount of government employees are necessary overhead and require private employment collected taxes to support them or the overhead will bankrupt the country. Who will bail us out?

The government's track record on running programs is predictably poor. Doing such a monumental program is doing more of what doesn't work at a dangerous to America's fiscal well being level. We should be doing several smaller, less risky corrections to improve our healthcare rather than creating another set of regulations to rival the IRS and requiring a large increase in public employment which is based on unreal projections. This is the same way that we almost had a world committee headed toward governing all countries climate related programs. It was based upon the largest fraud ever perpetrated on humanity.

This administration's total focus on other than employment has prolonged the high unemployment rate and intentionally (or they would have addressed it) kept over 10% of the working population of the US unemployed. It is larger than stated when one considers the quit looking, became self employed, retired early, ran out and other groups like the under employed that are not included. The priorities are obvious and it is to obtain power and wealth rather than do well by the people. There are a lot of co-conspirators such as some upper union and business people who are positioned to gain power and wealth from this legislation which creates the new version of the plantation with the slaves being the producers who are allowed to keep some of what they make by the benevolent elite.

One of the glaring inconsistancies is that those who promote a bill based on emotional anecdotes and the need to IMMEDIATELY address this crisis have a bill which implements taxation early and then gives care later. How can a thinking person reconcile that? Obama Care = Tax Now Care Later This creates the illusion that the bill is fiscally better than it is because it is based upon more years of income than of the expense. Why would they have to create illusions if this were a good bill? If we truly wanted to address the needs of the people, wouldn't we categorize the areas needing improvement like:
1. uninsured groups by category so that each groups' needs could be addressed providing a real solution for that issue
2. create competition between private sector insurance companies nationwide so that the public can shop for the best value. Companies fighting for market share in an open, competative market seem to me to be obviously more inclined to provide a better solution for their customers than a government beauracracy that does not answer to the customer. We have many examples of this with other government programs.
3. Massachusetts and Tennessee have problems with their government healthcare programs and would provide a good experiment in running this type of program if healthcare were the real purpose rather than the last ditch effort to grab power by the Progressive administration.

Like Cap-and-Trade, Health Care Reform which delays benefits to the people it claims to help is for a different purpose as illustrated in a speech by Ronald Reagan many years ago.

and the letter which I wrote is as follows:

Times and people have changed. We will remember the actions of the people who govern our country and remind each other when the election is at hand. The tolerant, apathetic voting population has awakened and is rallying against the assault on American values. It appears to me that we have an army of Alinsky Warriors in DC implementing the conditions called for by the Cloward – Piven Strategy* and that seems to be contrary to the oath of office in the swearing to uphold the Constitution of the United States of America.

I am proud to have you as my representative who fights to preserve American exceptionalism. I have previously written several legislators and asked for an explanation of their purpose in creating the conditions called for in the Cloward – Piven Strategy. Why would our government IGNORE the needs of the people by focusing on other than the jobs needed by over 10% of our working population? They have focused on their agenda, not jobs, for over a year now.

Increasing employment through historically proven methods would put people to work and increase the number of people with health care insurance. The government would not have to commit money to extending unemployment which is money gone forever rather than providing a return on the funds. The failure to stimulate jobs is intentionally maintaining a high unemployment percentage which is destructive to our country. This is an ANTI AMERICAN CHOICE OF POLICY!

The threat of Health Care Reform or Cap-and-Trade which penalize the private enterprise productive job creators is a major part of the high unemployment. How can a private enterprise make plans to expand and hire when they are under the threat of an administration which wants to suck the blood (capital) out of those who do?

The government’s track record of managing programs is abysmal and to do something of this size would be insane (that word is used with the definition intended, not for effect) as well as put America on the course to financial insolvency. I have heard rhetoric which does not reconcile with the actions regarding the deficit. The deceitful illusion used to promote this bill as decreasing the national debt is a sufficient argument against it. If it were good, it would not require deceit to promote it. This is insulting to the American voter.

Please continue the fight against this atrocity and push real healthcare reform which does not enslave the American people. There are several non destructive things which can be done without creating another IRS level of government.

The Health Care Reform would create a need for increasing public employment which is already at too high a ratio to private enterprise employment needed to generate the collected tax revenue to support the overhead of government. I don’t hear about this and that seems like that is as serious an indicator of our direction of fiscal travel as the ratio of the National Debt to GDP. It is like we have a bunch of college kids in a sociology lab who have no clue how economics works and they are tinkering with our world. I would rather believe this than what I truly believe.

* Cloward – Pivens http://cloward-piven.com/
Quote: Cloward-Piven is a strategy for forcing political change through orchestrated crisis.
The strategy was first proposed in 1966 by Columbia University political scientists Richard Andrew Cloward and Frances Fox Piven as a plan to bankrupt the welfare system and produce radical change. Sometimes known as the "crisis strategy" or the the "flood-the-rolls, bankrupt-the-cities strategy," the Cloward-Piven approach called for swamping the welfare rolls with new applicants - more than the system could bear. It was hoped that the resulting economic collapse would lead to political turmoil and ultimately socialism. “

Very Truly and Gratefully yours,
A B Howell
Posted by rossabh at 9:30 AM No comments: Links to this post